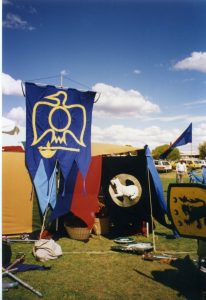 The freehold called Hrafn Fyste (literally Raven Fist) held a number of championship heavy tournaments from 1996 to 1999. The freehold was formed to give newcomers a home while they decided how they would assimilate into the barony. The champion wore a blue and gold torse, carried an axe attached to a blue baldric. The device of the freehold (unregistered) included a blue background with a gold raven displayed, voided and a gold axe below.