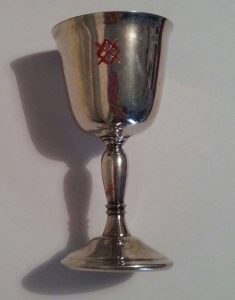 Founded: June 21 1986 AS21 – Baron Tovye and Baroness Aislinn create the Order of the Fretted Goblet.

About: The Fretted Goblet, given for service and endeavour, was chosen as a token for the order as a useful item and it also reflects on the barony’s reputation as a drinking barony. It is customary for new members of the Order to have their Goblet filled by members of the Barony and populace following the awarding.