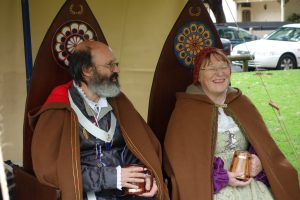 Baron Haos and Baroness Bryony – 8th Baronage of Innilgard during their Investiture Weekend.

Their excellencies Haos and Bryony stepped up as our current B&B on the 29th of June A.S. LIV (2019)

They also serve as all around ‘cheer-leaders’ supporting and motivating members of the populace into the best people they can be. Sometimes this can take the form of general encouragement, but can also include making introductions to other people who share interests.

The B&B have two primary responsibilities; First, to act as local representatives for the Crown of Lochac – reporting and liaising to ensure the Barony forms a unified part of the Kingdom. Second, to provide local recognition to the local populace for their achievements and actions – generally through holding Court, creating and handing out Awards for various fields and drawing attention to the many good deeds that makes the Barony a fun place to live.